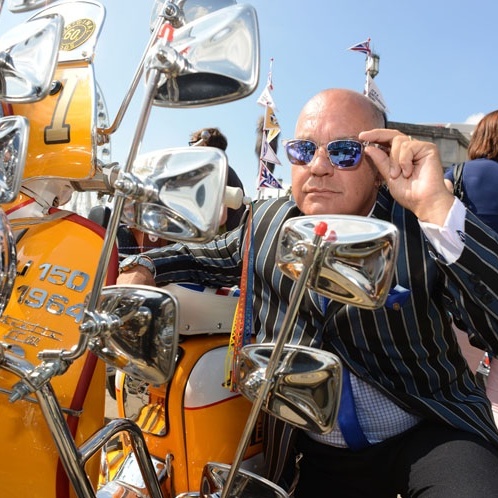 Hi there I am an original mod from Putney London in the 60s always been a mod rode the scooter wore the clothes lived the life. I would so like to get in touch with any other old mods out there or on…Continue

Moose The Mod. has not received any gifts yet

About Me:
Original 60s mod, Still wear the threads ride the scooter live the life. Spent many years living and working out of the U.K. Germany. Panama. Canada. Nigeria. But no matter where i was i was always a mod. Came back to the U.K. last year and totaly rebuilt from scratch a lambretta Li 150 to the original colour and speck of the one i had in the 60s, I would love to meet up with any old mods out there ifthere any as most of my old mates from Putney and northampton are no longer about.

Top 5 Tunes at the Moment
The Faces. 3 Button hand me downs.
Paul weller. Brocken stones
Frank Wilson, Do i love you,
Louie Louie. the kings men,
the Kinks, you really got me All or nothing . The small faces.

Great pics moose, I agree "it's a way of Life" great to see you wearing one of the CVS reachout badges..... Hope to see you at Brighton .... Jimmie (from Scotland CVS SC)

Yeh , cant wait . Be good to meet you . Im buying the Mrs some new clobber and trying to get her more involved (ouch , my pocket hurts!)  : ) so I will be taking her along and can perhaps introduce us both .

Im also doing the odd NU bash here and there too so give me a shout if youre out and about . If not speek to you before perhaps and see you there .

Got some tickets booked for Modstock , see you there ?

Hello Moose , hope you and yah bunch are all good !

Im looking to go to Modstocks Thursday night to see one of my old faves Secret Affair . Went to see them in London for the Soho Dreams tour and they were proper on form . Had a blast !

Probably going for the ride on the Saturday too and will be down at Brighton in August . If youre up for a meet give me a shout on here perhaps ? If not , no doubt weel hook up at some point . Be good to see you dude !

no, not yet, probably try getting one second  hand, if I can find someone somewhere, hope you had a good Christmas/new year! need to get a scoot soon though :(

The Mod theme in Quadrophenia was 'just a vehicle' for the characters - the 'making of Quadrophenia' (25th Anniversary DVD) is a 'cracking view' as it really sums up what it is all about. OK; the musical is about a Mod who 'tops himself' but the movie is radical in the fact that is 'boy loves girl - boy loses girl' - quite revolutionary in its day. It also featured 'male not female' nudity - another ground-breaking theme. Hand-held camera shots and amazing street scenes; all very exciting but not a film about Mods (just teenagers who happened to be set in the mid sixties). As a 'stand alone' piece of work its great (and yes; I watched it every night for a week at my local cinema).

Met Phil Daniels last week; must say, I was 'chuffed' as I thought he played the part really well.

The only thing I really have a grudge against is the 'homogenisation' of Mod now. I see young lads with Fred Perry gear on; desert boots and parka's; I go over to them to chat and they haven't got a clue. Don't like the music; haven't heard of any of the icons; don't know anything - just say 'I liked the gear' and walk off looking at me like I'm a t-t?

Yes, Mod is just a look now and a commercial cash-in. Look at the current trend (Top Man/New Look) - three button jackets, desert boots etc... all teamed up with a Prince Albert or Scott of the Antarctic beard?

So to finish; if you have really 'carried the torch'; love soul and dance all night; if you know your stuff (Atlantic/Stax/Chess) or Jazz, Freakbeat etc; then my friends - I love ya... Soul Boy, Suede head, Skin head or Mod - you wear it with pride; do it every weekend and would die for it - 'good on yer' I say.

Stick to your scene but pay respect to those with similar goals (keeping alive the scene, the culture and the 'way of life'). That way we can keep out the 'wanna-be's and the fakers' and get rid of the commercial crap.

Yes, we need new blood (we ain't getting any younger old boy) but lets keep the blood pure; educated and real!

Haven't met John in the flesh but have communicated through the forum; yes, seems 'splendid' - don't know if all of my comments sit comfortably with him. However; we do still live in a democracy and John is an educated guy with good 'sensibilities' and a 'strong chin'!

Would love to finally meet up and chat in person; John can 'strangle' me (LOL)!

Keep-up the good work fella; you've got all of the qualities I like; resolve, taste and spirit!

Good evening 'sir Moose' - respect where it's due mate!

Funnily enough; been having a debate about the rise-fall-and-rise of Mod on the Modstock site. I commented that, after '68 most 'decent Mods' drifted to Skinhead as a reaction against 'that Hippy crap' (beards... I ask you); preferring good clothes, short hair and decent tunes.

I also threw a 'spanner in the works' by posing the question 'are all new Mods actually revivalists, re-enactment society's or actors?' Fair play to you Moose; you've stuck at it through-and-through.

I also suggested that (apart from the odd 'old soldier' like yerself), it was the Skinhead/Suedehead/Soulboy who actually helped to keep 60's inspired culture alive as yer original Mods probably drifted that way to keep some sanity about them whilst beards and trouser widths got longer and longer.

I know that there is the debate going around that Northern and Mod are a 'world apart' - I think that's a bit strong. Who danced all night on speed to 60's rare soul throughout the late 60's to late 70's until the film that kicked it all off again came out - Northern's!

OK; not Mods, but as you say - it's the feeling, the spirit, the scene that makes a Mod. I have a mate called Cody in Leeds; he has half his face covered in tattoos; rides his scooter ALL day and ALL night and lives the dream. Stays true to himself, wears what he likes at ALL times and is respected by everyone and looked up-to by most... is he the 'Ace Face' of Leeds. If you saw him, you'd probably say no at first glance but the more I think about it; he probably is!

I love all things Mod but love to dance Northern as it is a massive scene (always was - always will be) in the North. I originally come from near to Stoke-on-Trent and Stafford so I guess it may be in the blood?

Am I diluting Mod; am I a 'cop-out'? Don't know; but what I do know is I am what I am; I wear what I like (mostly loafers/winklepickers/paisley/boating blazer/tonic suits) and have had a 'Marriot' cut for going-on thirty seven years. I wear sixties style clothes to work and get called 'retroman' by colleagues and customers alike - stuff 'em!

I do get singled-out at Northern doo's and poked-at by the mostly Skin/Rocker-Billy Leeds scooter contingent.

There were no Mods remaining in my home town after the late 60's and all we had were Skins/Suede's and Northern's to keep some scene going, so I guess I have to pay homage to those guys 'n'gal's for really 'keeping the faith'!

Anyway; great talking to ya buddy; love the bike, the style and the attitude!

Keep in touch; if yer going to Modfest, then lets grab a beer. If ya ever fancy a trip up 'tut' North; the doors open!

Thanks for the friend invite; gladly accepted!

Are you a North or South lad? I moved to Leeds from the Midlands about two and a half years ago and feel like 'the only Mod in the village'!

Very different scene up here with myself and 'Big Scooter Dave' being two of 'the few'. Like the pics of the 'scoot and boots'!

Liam Back said…
Looking to get one myself, where's the best place to look?