Remember there are no mod cliches....once a mod? never a mod.....it goes without saying!! Its not about paul weller or the small faces....its about you the individual. If we lose that then ure better being a member of every other youth sub culture that was ever invented!! Do it because you want to.....not because i or any one else told you it was cool. Northern ,skinhead or two tone is not mod. And if you need anyone to tell you then its not worth saying!!! Have a serious think about it!!

Dont sit on the fence,,every one has the right to have there own view! Though always remember we need to have more than scooters in common!!

Yep John I have to totally agree with you here. Over the years I have been out and about, going to mod events and seen how the seen is being manipulated to suit . I do think it is going on a path that might alienate alot of mods. Northern soul is a  scene on its own, as is britpop etc. I do see alot of  events with some less than honest advertising using  pictures of certain  bands but the tunes played are what the organisers deem to be mod or classic mod tunes are they often punt it. I have no problem with mods being into northern soul ,you like what you like, but it is not mod its northern soul and has its own merits.Did read a topic on another forum where original mods were at a mod do and didnt recognise any of the tunes being played. Tells a story doesnt it.If some mod events were a bit honest and just said it is northern soul then fine. Its probably the reason why more and more scooter boys are turning up to mod events.

The facts you state ally are just that mate,heard numerous accounts of the same from people up and down the country  and beyond! Though to be honest the Northern thats mainly being played at MOD events is a Shirt and cufflinks version of the true northern genre. Look i dont dislike Northern in any way,if its your bag then more power. It may just be a regional view and views may differ,i dont know of any Northern followers who want to be involved in the Mod scene. In fact its the very opposite,they once were mod by there own admission but left the scene years ago. Its another fact that now born agains are bringing there Northern/scooterboy/mod mixture back to the scene. When not truly dedicated to one thing then its easy to flit between scenes!!

Yeah, Iknow a few soulies who would be offended if you called them mods,but there does seem to be some strange crossover which myself I dont get, maybe it happened further south.Did see a soulboy at Brighton djing one night then up dancing the next.

I dont think its a Southern thing Ally, widen the horizion and get more bums on seats!! Organizors are now trying to cater for more, there's been a few calls on facebook for mod to go underground which for me wouldnt work. Whether we like it or not at this moment in time its too popular to go Underground. Someone commented on FB that he didnt know a mod who doesnt like Northern? What a load of tosh!! Again just goes to show how mixed up the scene is now!! 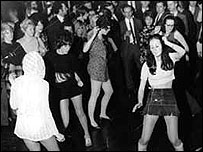 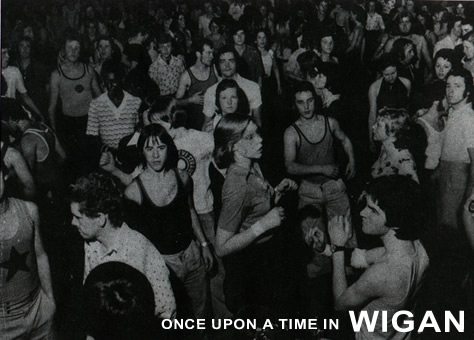 Northern Soul at the Casino, Not a Mohair suit in site!! Just as I remember the Genre to be!! Vanity left at the door! Looking smart never was in the equation!! So when exactly did it change then?? Ummmm

Haven't got an axe to grind over any of this but feel that history is being re-written; sometimes by those who weren't there or aren't old enough to know any better.

I can't really agree to the comment about Northern being reactionary against MOD - MOD as the movement it originally was, transformed into two greatly different cultures around 1966 with the influence of (less speed driven) drugs and travel to places like India and the States. This saw the birth of the 'hippy' and (in my humble opinion dear reader) the death of smart tailoring and the emergence of (heaven forbid) facial hair!

The true reaction to this saw the start of the skinhead movement - MODs who (rightly) said "stuff beards and flares"; dressing sharply and cutting their hair short as a demonstration against the length of hair and width of trousers.

MOD was now dead ladies and gentlemen. If you claim to be a Modernist in 1968 then my friend; you either smoked 'pot' and listened to Traffic (not a bad band I might add); were a Skinhead, or were a very lonely person probably looked upon as an un-cool museum exhibit.

The Skinhead turned into the Suede Head who (may) have started to take an interest in the faster Motown copies that were later called 'Northern Soul' tracks.

These 'scooter boys' were the closest thing you could get to MOD at this time; dressing smartly; riding Lambretta or Vespa scooters and listening to black music. As previously mentioned, your REAL (ex) MODs were now into really MOR tracks, a Suede Head or the last bastion of a bye-gone era; bravely hanging-onto a long-gone sense of style (a rare and singular figure).

Some of the people who claim to be 'older' MODS aren't old enough to have been a Suede Head or to have experienced the 'Northern' scene - which couldn't have been a reaction against Modernism as MODs (as we know them) had died out by 1968; Northern wasn't anywhere on the scene in '68?

MODs only either 're-emerged' by either shaving off their beards (or growing out their Suede cuts) or got into the scene by the release of Quadrophenia. OK, the odd 'old soldier' who had stuck-it-out bravely since '66 may have dusted off his 16" bottoms and looked 'very dubious' hanging round with the newly 'Parka'd spotty Herberts' now running around town; but it was really a whole new scene completely powered by commerce.

The 'soulies' did 'keep the faith' and probably filtered across to the second MOD scene as it resembled a lot of what they had known before - short hair, good clothes and (some) good tunes.

Do we have gratitude to a film that was never about being a MOD and to Northern fans who kept true to the ideal of dancing in clubs all night and listening to great black music (sound familiar reader) - you bet!

MODs (in general) may have come back to the fold (after years in the wilderness); but they must pay their dues to the hard-core Northern, Skinhead and Suede Heads contingents who kept some remnants of style, class and musical taste alive during the 'horrible, hairy' 70's which were driven my MODs who had transformed in something totally different.

Was Northern a reaction against MOD - absolutely not!

Is their a common thread running through the two scenes? There's definitely a 'lineage'!

If you were there (and I'm just about old enough and definitely look older than a lot of forum readers) and can either confirm or argue against my (honest and non-inflammatory) missive; please do.

Let's however, not re-write history please or become confused by well meant but misguided miscommunication.

Adrian, I get the guist of your post. This thread is not aimed at the originals in any shape or form and for that matter skinheads or suedeheads. This is squarely aimed at the revivalist era and upto modern times. And its not a Northern soul Knocking session either! Northern soul was and is a scene of its own and a thriving one at that! We are of the same age group and we know the difference between Mod and Northern. Whats happened here is a combination of Ex mods(from the revival period mostly) now reminiscing and coming back to the scene with a totally open mind toward fashion and music. In a way akind of non commital approach! Fact: there are more pilot jackets at most mod rideouts than mods these day with probs Brighton being the only exception,but that will change!! Fact: Event organisers are the number 1 culprits, they have got to make events pay. There will be a price to pay for this policy!! Also i think a lot of New/old mods cant differentiate the difference between Tamla Motown and Northern!! There's already talk of Mod going Underground, and that for me would be a mistake! Simply its suiting a lot of people to mould these scenes together plain and simple!!

I hate to say it but there was some scooter boys at Brighton, very oddly dressed,more scruffy than normal Ha!. I do get what your saying but at the mo Mod means quick cash to some and I also would not like to see it go underground.There is so much musical tastes and eras now sheltering under the Mod umbrella that it can be difficult to see the true mod tunes but we know whats what and that is all that matters.

It will only get worse as the scene gets watered down,watch this space there will be more and more twistie riders at brighton year after year!!