Trevor , I think what Johns saying here is perhaps not to break away from the Northern scene but how new comers may fancy going to a bash but when they get there its totally not what they were expecting .

My mate Tony has just recently took interest after watching the film Northern Soul and had a wedding to go to . He asked me to take him out shopping for a new suit as he likes the mod look and wanted to dress sharper than the others there . Hes never been in the scene before at all , hes 28 and fresh meat as it wer ,   : )  so im trying to show him the ropes . Hes got a good eye for detail and is sussed on the way of thinking . Hes come to a couple of Northern nights with me and Mod too . He likes the mod ways but prefers Northern Soul . Argh ! How do you get round that one ? Great to see young blood coming through though eh .

Mod for me died in 84 too , or was it 85 ? I went to Great Yarmouth national rally because like you I was one of a dying breed and went where my mates went . I hated the nationals (sleeping in tents , chopped up scooters (sacrilege in my views) , and nothing but drunk scooter scruffs as we called them fighting each other in some muddy marquee . The girls and blokes didn't care about their appearence anymore and simply let themselves go .  It just wasn't what I was there for and the thing that capped it for me and made me feel so down in my soul was watching the pricks on the gate . As scooterists rode in they wer left alone , but as any mods rode in they wer kicking mud up at them and there scooters . I felt so angry and low at the same time right in the pit of my stomach . Argh man it was horrible to see it , I cant explain how I felt but it made me leave the seen for some time sick as a pig .

Anyway , as you say , nothing we can say will change the way 2 scenes are , and yes... im so glad weve stood the test of time and have still got a vibrant scene to enjoy (its something to be proud of without any doubt) . I love the New Untouchables bashes because it does what it says on tin .

I know New Untouchables make a fair few quid out of the scene but hey , if it wasn't for dudes like them where would we be ? Obviously their interests are the scene and keeping it alive and for that im so greatfull . Lets enjoy what we have to the max , be thankfull of life and limb  and above all "party like every day is our last" .

Simply what John Means is MOD and NORTHERN are and always were two seperate scene, by rule of thumb you will always find that Most of the Northern lovers have more time than not Scooterboy history behind them. Usually the people who followed like sheep with there Buddies way back then.......:-)

Anyway , my next night that the rolling pin lets me off the lead is Mousetrap R & B on the 21st and I cant f---ing wait ! Im not sussed on how to put an avatar on here not being a "wizz kid" (I gave all that up ages ago ; )  ) . But if you can make it down and fancy a meet up just get Sir Rob Bailey to point me out . Always good to put a face to a name .

You only have to ask when did the two scene's become intertwined, coz no one really seems to know? For me it was the event organiser's/ Dj's who more times than not were mods of the revival period era! It makes sense for one simple reason, why put on a do' for 100 mod types when u can pander to all and get 300 or more to attend? Its all about the cash sadly, I know personally two original Wigan Casino members from back in the day who cant understand why Mod and Northern are almost now seen as one thing! There is a fantastic True  Northern Scene still in Britain today that has nowt in common with shirt/cufflinks and Mohair suits!! But it does suit the Scenedrifters down to a tee!!

Northern Soul is not northern, just badged as folk from the north of England like to be comfortable with the same old stuff over and over again!! Grab a table at the local wheel shunters and tappers club and write ya fave tune down, then do the same again a week later. Shuffle to the left (don't move ya arms) shuffle to the right, clap once, spin spin repeat for the next 40 years.

PS. You can only be a mod if you are under 20, have hair, are skinny and have a GS150. Everyone else is just an old f@rt on a scooter.

By the way , its"Wheel Tappers & Shunters Club" aint it ? Ding ding ding ding ding ! Showing our age for sure now eh . And the old git with the flat cap or was it a comb over ? All that was missing was a Whippet and some Pidgeons . I used to be allowed to stay up late and watch it upstairs with my brother on the old black and white portable when mum and dad had company round for the night . We only watched it for the chance we might see some old bint get her kit off .  XD

Wheel Shunting Tapping what .... my mum said northern souler's should be unseen and unheard.

I have to fly as I have to help get a classic Italian scooter motor ready for a 'best of british' day here in Perth. Lots of tat plastic target decals, union flag enamel badges from Saigon and a lovely german snorkel parka from the 70s. (Gloves sewn together with knicker elastic from sleeve end to sleeve end)

I thought that 10 years ago it could never get worse, but as the years move on the more diluted the whole soul of the mod scene diminishes. It seems to be fancy dress nights here in Perth and not a lifestyle anymore.

But there is light at the end of the tunnel. The Brighton 60s weekender is great and now that we are relocating to France .... here comes the nice. Pick the best and discard the numpty rest.

A 42 degree day here in Perth tomorrow on the Sunset coast of Western Australia. Union Jack board shorts, leopard print flip flops and 'we are the mods kiss me quick' flat caps for the northern lot.

Stay sharp and before you know it you'll be back to normality .

Thats a fair price in Australia Lone Wolf, im sure you'll get a buyer!! Then again just back recently from a month in Perth, and seen a GTS riding MOD? with fox tails and the whole shabbang. Wearing what i can only describe as Biker gear! So they might not appreciate your thoroughbred GS 150!!

Perth is the most modernist mod village in the world. It is full of more brit than brit type mod scooterists who love ol blighty (I don't know why they left, must have been deported) . They must be mod as most have classic P Ranges (some lucky enough to have latest GTS) resplendent with union flags, targets, snorkel/german parkas, EPL football shirts, HP sauce fuel additives and WHO personal rego plates.

Often mistaken by local bikers as being the circus coming to town, these pods ride in 40 degrees heat (lucky the EPL football shirts are made of synthetic material to get rid of the old spice/brut and blue stratos dosing beforehand) and once the motors are stopped that is when you know who they are. YOU CAN STILL HERE THE WHINING !!!!

A GS150 ride a day keeps the numptys away. (Or move to Melbourne) 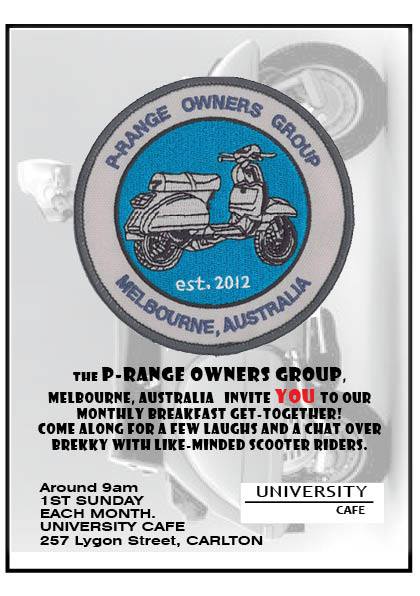 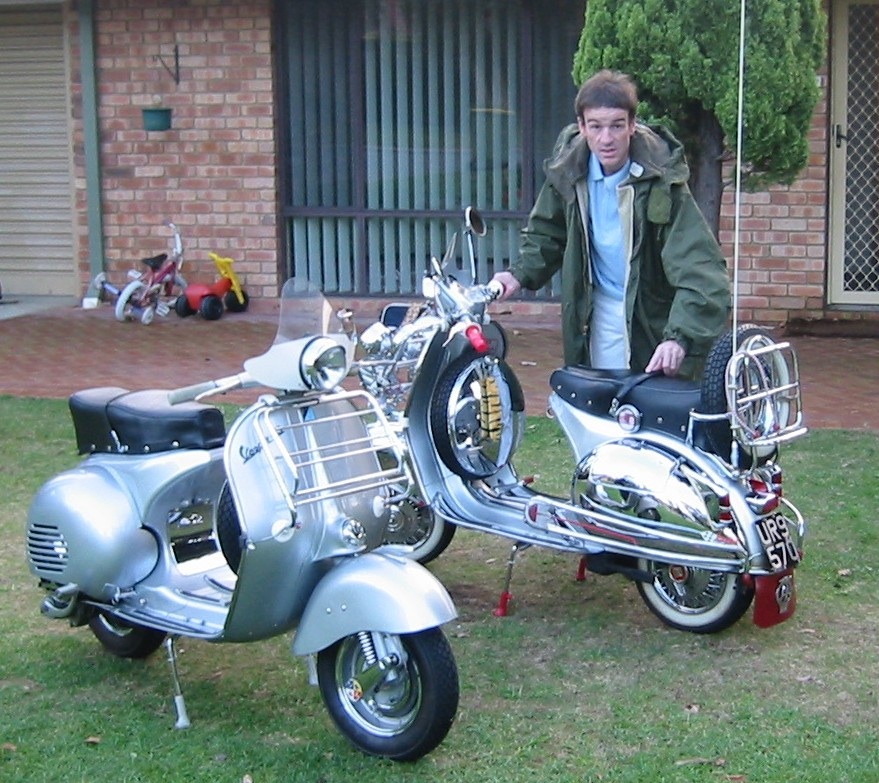