Was speaking to a Northern DJ at Rhythm A GoGo in Carlisle on saturday night who has been on the scene since its Origin, whilst discussing this Northern/Mod thing i wasnt shocked that he was in agreement with my stance! And i wasnt shocked for one simple reason,coz someone who was there fine well knows tht its too diffo scenes and always has been. Big respect to the true Northern Soulies of which Tony definately is one. Our parting line was Northern Soul aint Mohair suits and ties!! Couldnt have put it better myself!!

I spose ide say - I love a sweat out , but I hate dry cleaning bills !

Im doing Modstock if youre there mate ? Praps see you there ?

hopefully see you there chris!!

I don't get out to mod nights as much as I'd like to these days, but I too often thought about the relationship between northern soul and mod 'scenes'. Firstly, what seems to me beyond dispute is that some of the music that comes under the umbrella term 'northern soul' is also 'mod' music, in that certain songs and styles would have been danced to in London in 1965 and then in Wigan or Stoke in 1973 or whenever and then much later on. Also, some of the discoveries on the northern scene (particularly Latin soul or boogaloo tunes) are definitely in the style that original mods would have liked even if the records themselves were not in the UK during the 60s. So, in a nutshell, there is no point disputing the links between both scenes.

Aesthetically, of course, it's hard to equate the string vests and baggy trousers with the mod image, but then I don't think many people would do so. These days, though, I can't see the problem with people from both scenes mixing together on or around the dance floor, as long as everyone's respectful. No one owns mod or northern, and sometimes a mod will be more mod if she or he is standing out around people who aren't mods, as their individual modness will come to the fore. Remember folks, friendliness is close to Modliness!

The DJ i was talking to raised the very point you speak of above. Northern Soul 'borrowed' a lot of 60's soul music that was defined as being mod in that era. But here's the whole point about the misleading link in todays scene. If you play Northern Soul at a mod event and tout it as Northern,whether in 1 room or on a main stage; 1/ You will no doubt get the non mod types attending who quite rightly love there 'Northern'. 2/ When the soulies start attending then you'll have the 'Scooterboys' who in there mind adopted the Northern Music in the 80's. The above points are becoming more relevant at Brighton MOD Weekender as every year passes, the non mods who drive the non mod scooters and have a more casual dress sense feel they are more than welcome. Watch out this year @ brighton when its public knowledge that there is going to be a Scooterist boycott of the IOW. Where will they go....well wait and see. And can we blame them? After all there's a Northern room @ komedia.!! Maybe we can put a flyer out saying ''Northern Soul''  smart dress only! And thats not what northern was ever about. Do you start to realise the Conundrum??

Here's all the mods watching some northern soul dancing!!!??? 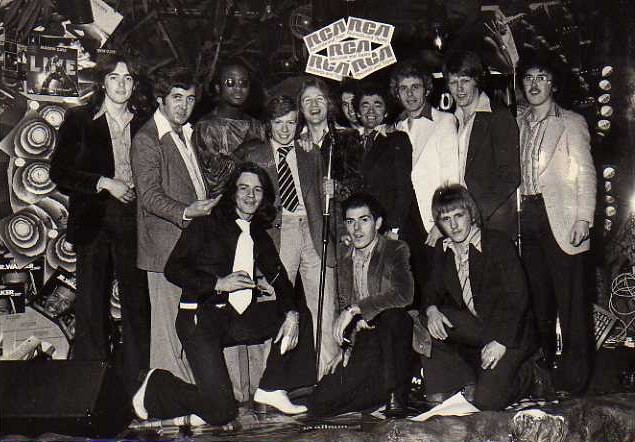 Until I saw the Stevie Wonder LP, I thought it was Showaddywaddy at a Doctor Who convention, c. 1977.

That Oldschool mod look sure had you fooled  :-)   NOT

Remember the people in the above pictures didnt know they were mods?? But the money making rule changers have rewrote history!!!