YNX716 is a HipHop lyricist from Buffalo Ny. He delivers a 90s sound that takes you back to the essence of HipHop. He has worked with elite artist such as Conway The Machine as well as 38spesh who are both featured on his recent album Hennessy Memories. His recent single Inspired by Benny The Butcher YNX716 follows up with the 97 Nas single after releasing NY State of Mind. 97 Nas pays homage to Nas as well as Benny the butcher. YNX speaks from a prospective of Nas in this controversial release.

3rd Base Member MC Serch supports Buffalo Hip Hop! For those who isn’t aware, MC Serch secured hip hop Legend Nas first deal and also executive produce Illmatic He recently gives his stamp of approval to Buffalos’ own YNX716 in a Twitter retweet that reads “Im a Fan. G.A.M.E recognize Game". Check it out below. 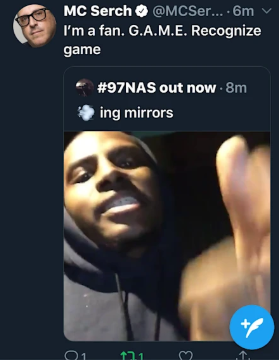