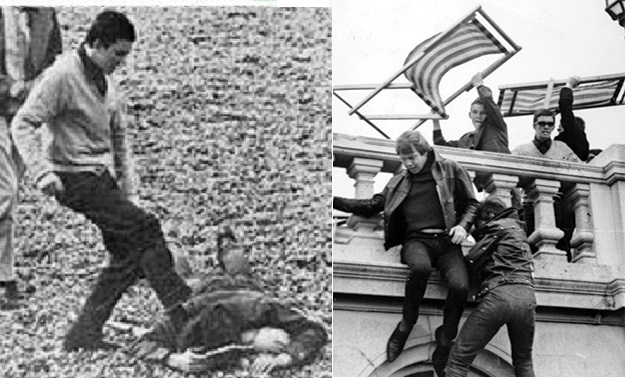 How many of us have viewed these two photographs taken in May 1964 at Brighton?

Check out the chap putting the boot in on Brighton beach in photo one. Then take a look at the chap with the dark glasses on in photo two. What do you think? Is this the same person captured in the two images but, with and with out glasses? There is a series of photos of the deckchair battle on Brighton aquarium sun terrace, some of which feature our suspect. When compared to the boot boy on the beach, you will see he is wearing identical clothing.

There were two photographers that day, one on top of the sun terrace and one below in Maderia drive. In the photo taken on the terrace you can make out a  ring on the suspects little finger of his right hand. This also seems to be the case in the photograph of the boot boy on the beach. If this is the same Mod boot boy in both photographs, then what a claim to fame. Not only did he make the front page of several national papers of the day for separate incidents, he even ended up on the cover of the Small Faces big hits album!

Well spotted & fair play to him