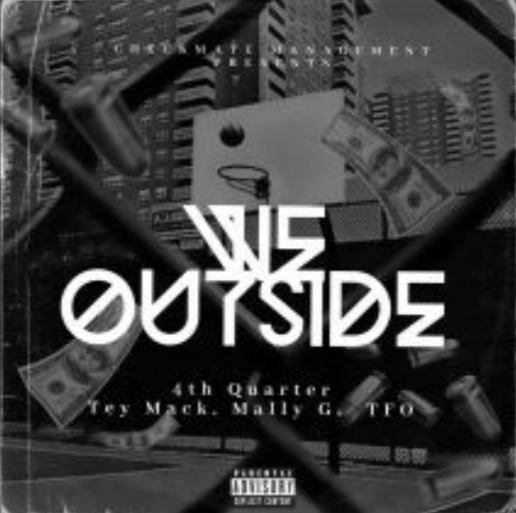 In celebration of 4th Quarter New single to be released to the public on September 18th "WE OUTSIDE" through Checkmate Management Group LLC, a virtual single release listening party will be held Via Facebook Live From The Infamous QUAD STUDIOS in NYC.

On the preceding Thursday, September 17th, 2020 at 7pm Checkmate Management Group LLC will do a soft release for 4Th Quarter’s Single "We Outside" To the World Wide Coast To Coast DJ’s which services over 1000 DJ's worldwide as well as release the single to Media and Industry label representatives. Checkmate Management Group decided to do a live listening event so the Tey Mack, Mally G, and the TFO supporters and fans can attend and take part in the celebration of the release of “We Outside”. "We Outside" will be released through Checkmate Management Group with distribution through Tidal, Spotify, Soundcloud, iTunes, Apple Music, Google Play, Amazon and Youtube. “We Outside” Talks about Having fun, Women and The GenX New York City living.

4TH Quarter Record Label is a New York based Hip Hop Trio residing In The Brooklyn New York City Housing Authority. This trio is a force to be reckoned with in the music industry, rap / hip hop genre with ample amount of accomplishments under their belts, charted high top 3 on the indie circuit charts for "The Hottest Male Group" Summer 2020 from DJ Xotic Mami CEO Of Xtreme104.com, NYC Biggest Indie Radio Station. Checkmate Management Group and those around them are confident that 4th Quater’s rane will spread well outside the walls of the New York and the Tri-State area. In 4Th Quarter The Label’s music, you can see elements of their New York roots where they first began their music, songwriting and rapping career, but also their love of the ins and outs of N.Y. is the catalyst of their music career. The 4Th Quarter has also moved into acting and will appear in television and film. Some of their recent credits include; "A Queen’s Tale" which will premiere on Xtreme Vibe TV / ROKU Television Network as well as have additional song placements within the film. A recent Music Video Program "The Video Plug" has also picked up “We Outside” to premier in its highly anticipated first season. 4th Quarter Record Label (Tey Mack, Mally G and TFO) they never disappoint!!!! Follow 4th Quarter @4qtl_mally @4qtl_ceo @4qtl_teymack