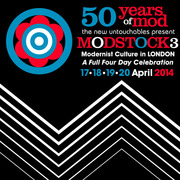 *Members will be given Priority Tickets*

Finally getting back to normality a massive thanks to everyone who came from all corners of the World to make MODSTOCK something truly special that I won’t forget. Many thanks to the bands, deejays and fashion show models that performed magnificently. So many great moments over the four days many of which we managed to catch on film for our Modstock DVD that will be out in the near future.

The Modstock album, T-shirt and pins are available now in the NUTSTORE, grab a momento here http://www.newuntouchables.com/nutstores/index.php?route=product%2Fca...

The next stop on the New Untouchables train is the Scarborough Mod Weekender and the Buckingham Palace Scooter Run/Timebox weekender on Whitsun bank holiday. Cheers Rob Bailey & The NUT's Team

GO TO THE MODSTOCK SITE HERE!

We have some incredible news to announce!

KENNEY JONES and FRIENDS headline our BRITISH LEGENDS live bill on Saturday night at MODSTOCK performing SMALL FACES songs together with The Stone Foundation. The response to the new Box Set and Greatest Hits releases have been phenomenal, you can buy a copy at the show and get it autographed at our sponsors MOJO MAGAZINE signing session.

If that wasn’t enough to blow your cool, we are delighted to welcome become back to the MODSTOCK stage our old friend EDDIE PHILLIPS from THE CREATION, who will no doubt bend a few violin bows during the show. Tickets are available here but be quick http://www.229thevenue.com/portfolio/modstock/

Write this date in your diary and grab yourselves a piece of the action folks,
this is the BIG one. New Untouchables present
‘MODSTOCK- 50 years of Mod’
in London, the birthplace of Mod.

The Mod phenomenon has touched the hearts and souls of so many people and is still influencing fashion, music, art and culture in the 21st century. This event is a celebration of 50 years of Mod not from its mysterious birth but when it swept across the whole of Britain.

Since then it has reinvented itself time and time again to each new generations in keeping with the original spirit of it’s pioneers and originators.

The four day event over the Easter Holidays 2014 will showcase all aspects of Mod music and culture spanning the last five decades. The Mod scene is now truly global as this event proved ten years ago when artists and disciples from all over the World descended on London for ‘Modstock 2 - 40 Years Of Mod’

Over the coming months we will start to reveal the full program on our network. Early bird tickets will be available to members of the New Untouchables network first before going on general sale. It’s free to join the network and takes just five minutes to sign up and create your own profile which has many cool features.

The whole festival will be filmed for a future DVD release and TV documentary so make sure you are part of this historical event!

Where - 229 the Venue, Central London

You need to be a member of MODSTOCK3 - 50 Years Of Mod to add comments!

Hiya Bèrto
Many thanks for your membership and offer of help, if you contact Rob Bailey he is always looking for keen, able and in-the-know writers for NUTSMAG etc?

If there is anything I can do to help with the organization just let me know.

This is the One!