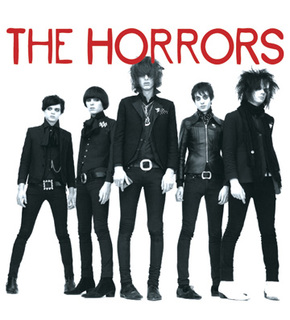 Horrors_lbb4_2 They might be the most exciting British band since the Sex Pistols, but there’s very little that could’ve prepared The Horrors for what’s happened to them since they played their first gig in September 2005.
A mess of sharp elbows, big hair, feedback and monochrome clothes, since that gig at The Spread Eagle in Shoreditch, the band have played gigs everywhere from LA to Hull and Tokyo, been tipped by Jarvis Cocker as the future of British rock and appeared on the cover of NME after only two singles. They’ve made a video starring acclaimed actress Samantha Morton with legendary director Chris Cunningham and then had the same video swiftly banned by MTV for excessive strobe use and general gruesomeness. They’ve seen UFOs at 3am on the way back to London from a gig in the grounds of a stately home in Derbyshire. They’ve caused $10,000 of damage during a near-riot at a gig in New York after signing to Island Def Jam in America. And they’ve released a four dark-hearted singles that have annoyed as many people as they’ve enthralled.

"It’s weird, because when we do gigs we just set out to play our songs and not annoy or wind up anyone - but we often cause loads of trouble in the process", explains keyboardist Rhys ‘Spider’ Webb evenly. "Still, we’re not interested in pleasing everybody. And we certainly don’t have a problem with pissing people off in the process. We don’t care what people think of us. If we upset people we’re not bothered in the slightest."

Likely to win over the floating voters more than annoy them, it’s little wonder that The Horrors’ debut album sounds so assured – this band have squeezed more into one 18 months than most groups do in a lifetime.

It also helped that, all being fanatical collectors of vintage music from ‘50s rockabilly and ‘60s garage to ‘70s post-punk and ‘80s no-wave, the band had a very clear idea of what their first album should sound like.

"With ‘Strange House’ we wanted to capture the energy and enthusiasm of a band that had quite little experience of either being in a band and playing" Webb continues. "So this album documents the journey from walking into a rehearsal room a year ago and playing covers of ‘Jack The Ripper’ by Screaming Lord Sutch and ‘The Witch’ by The Sonics up until touring the world."

I rather like them, but then, I like The Black Belles, The Gore Gore Girls, and also The Boys New Door and other Australian Swampie music.